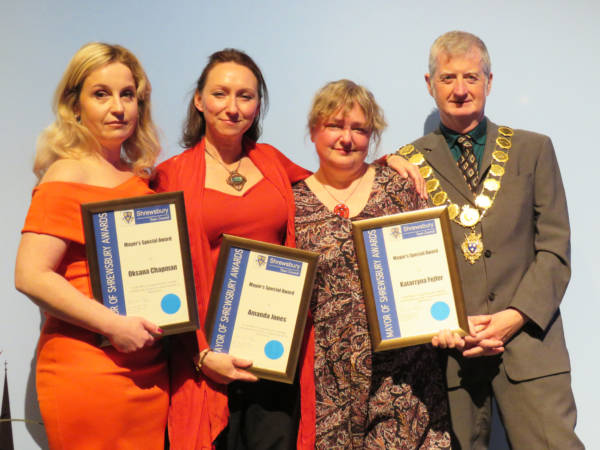 Nominations are being sought to celebrate those unsung heroes who have made an outstanding contribution to the town of Shrewsbury.

The Mayor, Councillor Elisabeth Roberts, is asking businesses, organisations and residents to make submissions for Shrewsbury’s annual civic awards, designed to highlight those who have gone above and beyond for the benefit of the town.

Nominations are invited in nine categories, which will be judged by a panel of members and officers of the Town Council, with the winners revealed at an Awards evening in the Walker Theatre at Theatre Severn on April 18.

The Mayor will also present her special Awards to people she has met throughout her Mayoral Year and who have played a key part in helping make Shrewsbury a special place to live and work.

The Awards categories are:

Built Heritage Award – recognises the achievements of individuals, organisations and companies that own buildings in Shrewsbury and have worked towards enhancing the built heritage through new development in sympathetic heritage settings to reuse and the conversion of existing buildings.

Business Award – acknowledges the work of businesses, organisations and individuals who have contributed to the economy of the town, be it through providing job opportunities, business expansion or general promotion and marketing of the town. Not-for-profit organisations are also considered in this category.

Climate Emergency Award – recognises the work of individuals, groups, organisations and businesses that have undertaken activity to raise awareness of Climate Emergency locally, promoted efficiency and sustainable use of resources or undertaken initiatives to reduce the impact of carbon.

Community Award – celebrates the work of community groups and individuals who have contributed to the social well-being of the town, from major community projects to someone who looks out for their neighbours.

Courtesy Award – recognises individuals, companies or organisations within Shrewsbury who have taken extra measures in promoting Shrewsbury as a friendly and courteous place.

Environmental Award – celebrates the work of organisations, community groups and individuals who have contributed to enhancing the environment and promoting the green space around Shrewsbury.

Tourism Award – acknowledging businesses, individuals, groups and organisations who have contributed to tourism within the town.

Lifetime Achievement Award – This award shall be given to one person who in the view of the Mayor has provided distinguished service and has made a significant impact to the Shrewsbury community over a sustained period.

Visitors to Shrewsbury’s Indoor Market can also vote for their favourite Market Trader of the Year by completing one of the nomination forms and posting it in the ballot box provided.

Councillor Roberts said: “Every year the Mayor's Awards recognise those who contribute to our community in so many different ways.

“We want to celebrate all of the people who help put the pride into our wonderful town. I have met so many unsung heroes during my time in office and these people wouldn’t dream of putting themselves in the lime-light, so we need members of the public to nominate them. If you know of anyone who has gone the extra mile please take the time to fill in a nomination form.”

“I would urge the public to nominate any individual or group they feel worthy by visiting the Town Council’s website and completing the nomination form online.”

Any queries can be directed to Sally Nicholson, the Mayor's Assistant, on 01743 257655 or email sally.nicholson@shrewsburytowncouncil.gov.uk

The closing date for completed entries is 12.30pm on March 24.

Details of each category and the nomination form can be found on the Town Council’s website at: https://www.shrewsburytowncouncil.gov.uk/councillors-list/the-mayor/mayors-awards-2023/