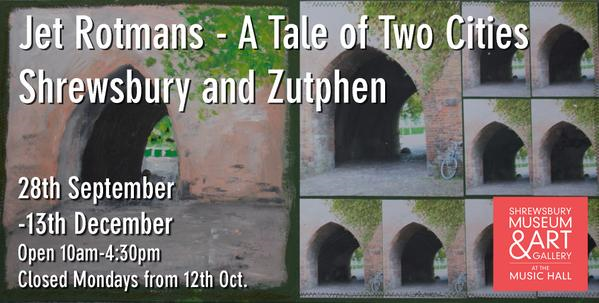 An exhibition by an artist from Shrewsbury’s twin town of Zutphen will launch in late September at Shrewsbury Museum & Art Gallery.

‘Jet Rotmans; A Tale of Two Cities – Shrewsbury and Zutphen’, will open to the public on September 28, with an official launch by Mayor of Shrewsbury, Councillor Miles Kenny, on October 1.

The exhibition will reflect Jet’s parallel responses to Shrewsbury, and the wider Shropshire landscape, to her own town of Zutphen. Jet has got to know and love Shrewsbury and Shropshire on her frequent visits over the last three years and has been inspired by the contrasts and connections between the two locations. Zutphen echoes Shrewsbury, an attractive market town with a medieval core, situated on the busy River Ijssel.

The exhibition takes place against the background of the many years of twinning exchanges involving thousands of residents from the two communities.

The work exhibited will be largely in the form of Jet’s favourite medium: the Artists’ Book. Jet currently specialises in this genre, using traditional skills to craft the books themselves which hold, in the form of photographs and related paintings, images of the local landscape she has observed and her responses to them. In addition there will be paintings (acrylic on paper), poetry and films as well as scrapbook archive material.

The exhibition will remain at the Museum & Art Gallery until December 13.

Shrewsbury’s association with the historic Dutch town of Zutphen dates from 1586 when Sir Philip Sidney, an old boy of Shrewsbury School, was wounded at the battle of Zutphen when trying to liberate the town from the Spanish occupation.

Contact was renewed after the liberation of Zutphen at the end of the Second World War, when the population of Shrewsbury sent aid to the town. In October 1945 Shrewsbury adopted Zutphen. Contacts were continued and encouraged by both towns and an official Twinning was finally recognised in May 1977.

Councillor Alan Townsend, who is a member of the Twinning committee said: “I’ve been strongly committed to Shrewsbury’s links with Zutphen since my first memorable visit there through a young people’s exchange scheme just after the end of World War II from which I brought back great memories.

“Enjoying, at first hand, family life in another country is an enriching experience. Subsequently with Judy, my late wife, I have made many cultural and social visits to Zutphen, including one as Mayor, while in return hosting in Shrewsbury our many Dutch friends, including Jet Rotmans. Living in each other’s homes, enjoying time together and sharing ideas is the way to get a proper understanding of another country, its culture and its people. May our Twinning links continue to prosper.”