History of the Council

Shrewsbury Town Council came into being on 1 April 2009 as a result of Local Government Reorganisation. At the same time the existing Shrewsbury and Atcham Borough Council ceased to exist and its powers and duties were split between the new unitary council for Shropshire and the Town Council.

The Town council’s area includes the whole of Shrewsbury town centre and adjoining residential areas.  With a population of more than 70,000 it is one of the largest town councils in England, providing  horticultural services for the town, as well as being responsible for The Quarry, numerous small parks, sports pitches, recreation grounds, allotments and highway verges. In addition, the Council manages the provision of the town’s market, community facilities, bus shelters, street lighting and public toilets.

The Council is also proud to be part of Team Shrewsbury and works with local partners to ensure the town’s reputation as a major tourist destination, and as an exceptional place in which to live and work, is maintained and  enhanced wherever possible.

As part of this commitment, Town Council strives to defend Shrewsbury’s horticultural legacy. Our dedicated team work hard all year round to uphold Shrewsbury’s mantle as  a “town of flowers” and winners of the Britain in Bloom Champion of Champions Competition.

The Council also continues to uphold the historic civic traditions upheld by former Borough Mayors. The Mayor is the First Citizen of the town and is often called upon to help promote local charities or causes. It is an impartial role that is not dictated by any political preference. In addition to his or her duties as amabassador for the town, the Mayor also has a civic role to perform as the Chairman of the Council. The mayoral history in Shrewsbury dates back as far as 1638. 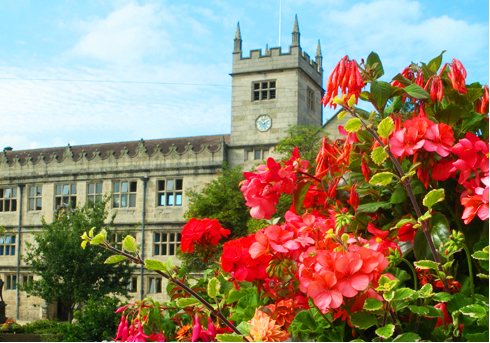 History of the Town

Shrewsbury is a vibrant town with a long distinguished history. First recorded in a Charter of 901, Shrewsbury developed as a market town aided by the natural defensive qualities of a large meander in the River Severn. The original Castle (thought to replace a Saxon fortress) was built by Roger de Montgomery under order of William the Conqueror and was rebuilt and enlarged by Edward II.  The public library, where Charles Darwin studied as a schoolboy, and the timber framed Rowley’s House Museum are among a wealth of historic listed buildings on steep narrow streets and little alleyways, that make Shrewsbury a major tourist destination.

The town has a population of more than 70,000 and is surrounded by the ancient Shropshire hills of the Stiperstones, the Long Mynd, Wenlock Edge and the Wrekin.  The county has a scenic landscape made famous in A. E. Housman’s A Shropshire Lad.  North of Shrewsbury lies the site of the Battle of Shrewsbury (1403) where Henry IV defeated the rebellious Barons of the Welsh Marches and Hotspur was killed.  The town is 40 miles west of Birmingham and about 60 miles east of the Snowdonia National Park.

In more recent years the town has undergone considerable development in commercial and cultural areas. It is the regional shopping centre, served by numerous specialist shops as well as two main shopping centres and out of town retail parks. The town experiences a lively nightlife based around the numerous pubs, bars and restaurants.  Other highlights of Shrewsbury include The Quarry (the town’s municipal park designed by Percy Thrower), the Abbey made famous in the Brother Cadfael detective novels of Ellis Peters and the annual international Shrewsbury Flower Show.  In addition a new purpose built theatre situated on the riverbank next to the council’s offices opened in March 2009.