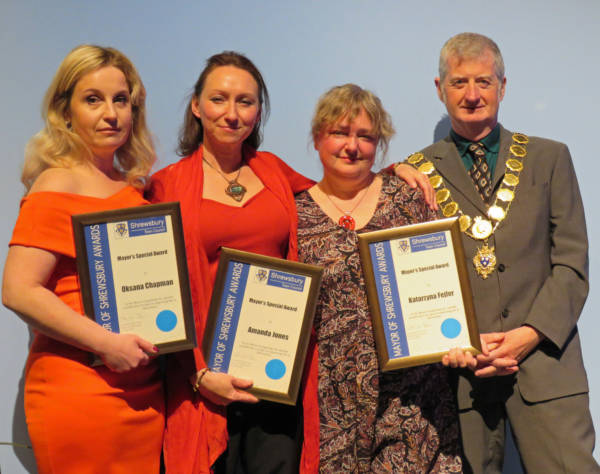 The unsung community heroes of Shrewsbury have been officially recognised by the Mayor for playing their part in helping to make the town a special place to live, work and visit.

The Mayor’s Awards scheme is Shrewsbury’s equivalent of “The Oscars”, with local individuals, organisations, groups and businesses being recognised for their achievements, which benefit the town.

With some of the town’s most dedicated citizens and organisations receiving honours from Mayor of Shrewsbury, Councillor Julian Dean, this year’s Mayor’s Awards ceremony took place at the Theatre Severn this evening. [THURS]

The Lifetime Achievement Award went to Geoff Hardy and Peter Ruscoe for their support of numerous local initiatives, many aimed at supporting and championing the LBGT community as well as supporting other groups and individuals in need of help.

The results for this year’s Market Trader of the Year for Shrewsbury Market Hall, which is jointly run by the both Shropshire Council and the Town Council, were also revealed at the event. Hundreds of votes were cast and the overall winner was House of Yum, closely followed by Tom’s Table in second place and The Card Stall in third place.

Councillor Dean said: "The Mayor's Awards are my opportunity to thank some of the wonderful people and organisations who do so much to make our town a great place to live. It's a real privilege to recognise and reward those who gladly give their time and talent to benefit others living in our local community.

“Throughout my year as Mayor, whilst it has been governed by Coronavirus restrictions, I have nevertheless, been constantly amazed by the kindness, generosity and compassion of local people, and I'm only sorry that it's impossible to recognise everyone's contribution with an award. However, I'm delighted that I've been able to give out these awards on the night to so many home-grown volunteers.

“Our local heroes believe in Shrewsbury, and its people, and that's what motivates them.”