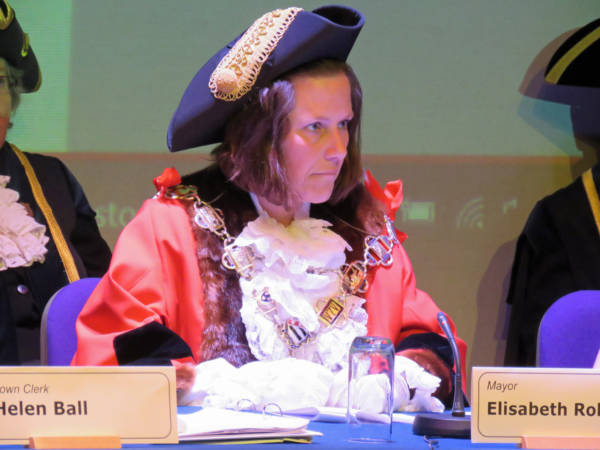 The new Mayor of Shrewsbury has been elected for the coming year, with Councillor Elisabeth Roberts officially sworn in as Mayor at the annual meeting of Shrewsbury Town Council last night. [MON]

The mayor-making ceremony, which was held in The Walker Theatre, saw Councillor Roberts take over the role as civic leader from outgoing Mayor, Councillor Julian Dean.

Councillor Roberts said her main aim as Mayor is to promote the wonderful and varied communities in Shrewsbury.

She said: “I’m looking forward to the next twelve months and it is a great privilege to be elected as Mayor of Shrewsbury following on from all those who have held the post before me.

“I am very proud to be a part of the Shrewsbury community, my adopted home, and my year as Shrewsbury Mayor will concentrate on bringing all communities together, as we saw at the beginning of the pandemic.

“I will also have my three wonderful children join me and to represent Shrewsbury youth whilst also supporting mental health causes.”

She also took the opportunity to thank former Mayor, Julian Dean for the work he had done for the town over the last twelve months.

“Despite the difficult conditions the Mayor has encountered with the Coronavirus pandemic, he has done a tremendous job of representing Shrewsbury during his term of office. It is now my responsibility to carry on the tradition of highlighting the fabulous town we have here both within our community and beyond.”

The incoming Mayor also outlined her fundraising plans for the year.

“During my Mayoral year, I will be supporting Harlescott Grange Community Hub which helps to support local residents and has made great progress over the last eighteen months.

“In addition, I will also be supporting Omega Care, an organisation that has provided a variety of mental health support to both Shrewsbury and Shropshire communities, especially during the Lockdowns.

“There will be a range of fundraising events over the course of the next twelve months and I hope that people will come along to have some fun and raise money for these worthwhile causes.”

Councillor Roberts will be officially sworn in at a civic service held at St Chad’s Church on Sunday, May 15.

With no Civic Parade this year, guests should make their way directly to the church and be seated by 9.50am for the start of the service at 10.00am

Members of the public are welcome to attend.

The traditional Loving Cup ceremony took place last night when the Mayor was invited to drink from the vessel and toast the Queen and the town.