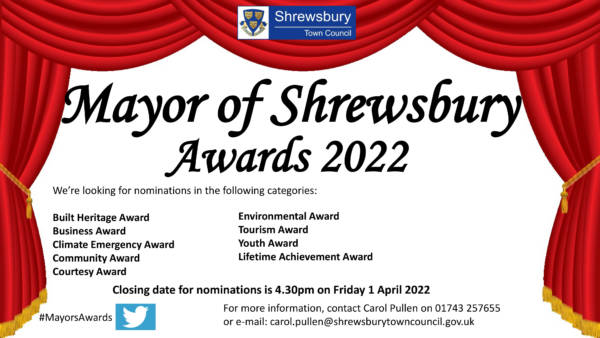 With a closing date of April 1, there’s still time to submit your nominations for the annual Mayor of Shrewsbury Awards to acknowledge those unsung heroes who have made an outstanding contribution to the town of Shrewsbury.

The Mayor is asking businesses, organisations and residents to provide suggestions for Shrewsbury’s annual civic awards, designed to feature those who have gone above and beyond for the benefit of the town.

Nominations are invited in nine categories, which will be judged by a panel of members and officers of the Town Council, with the winners revealed at an Awards evening in the Walker Theatre at Theatre Severn on April 28.

In addition to these nine categories, which will be judged by a panel of members and officers of the Town Council, the Mayor will also present his special Commendation Awards to people he has met throughout his Mayoral Year who have played a key part in helping make Shrewsbury a special place to live and work.

Mayor of Shrewsbury, Councillor Julian Dean, said: “The Mayor’s Awards is a great way to recognise the selfless work that so many people undertake within the town that makes it such a fantastic place for everyone.

“This is the last chance for people to submit their nominations for this year’s Mayor’s Awards and I would encourage the residents of Shrewsbury to visit the Town Council’s website to submit their recommendations to acknowledge those unsung heroes in the town, especially those who have worked so hard over the last twelve months through the Coronavirus pandemic and the floods.”

Full information on the criteria for the categories can be found on the Town Council’s website at https://www.shrewsburytowncouncil.gov.uk/councillors-list/the-mayor/mayors-awards-2022/ where nominations can be submitted via the online form.

For any queries regarding the nomination process, please contact the Mayor's Secretary on 01743 257655 or email carol.pullen@shrewsburytowncouncil.gov.uk

The closing date for entries is April 1.